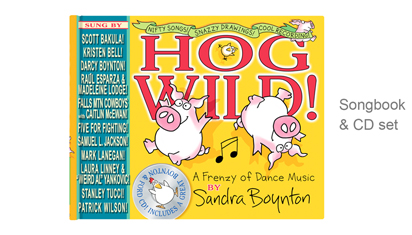 
• For Ages One to Older Than Dirt

All new songs, with a sound straight out of the carefree, irresistible music of the '50s and early '60s. Better yet, sung by many of the legends of that era: Neil Sedaka, Bobby Vee, B B King, Brian Wilson of the Beach Boys, Davy Jones of the Monkees, Gerry & the Pacemakers, Steve Lawrence, Sha Na Na. The bomp is back.


DOG TRAIN
a Wild Ride on the Rock-and-Roll Side


• For All Ages and Obedience Levels

"What is this - the Ina Gadda Da Vida of children's songs?"
- John Popper Well, yes.
This is the third of the Boynton/Ford renegade children's albums, sold as always with a deluxe illustrated lyrics book. Moody, energetic, and unpredictable new songs, written and illustrated by the moddy, energetic, and unpredictable Sandra Boynton.
Performed by the most unusual mix of legendary musicians imaginable - Blues Traveler, Spin Doctors, Alison Krauss, Hootie & the Blowfish, The Phenomenauts, and yes, there's the obligatory Weird Al Yankovic/Kate Winslet duet.

The very first Boynton/Ford songwriting and music production collaboration. Fifteen original songs performed by the terrific
and versatile Adam Bryant. This captivating recording is a
must-have for home and car and yurt (if wired.) (Not you-the yurt.)

Perhaps the single most ambitious, inexplicable project in a
career fraught with ambitious inexplicability: a book/CD documenting a simple day in the simple lives of the simple pigs
of Snouto Domoinko de Silo. Intoned in the original Pig Latin,
with antiphonal responsari and commentaria by the lesser
barnyard animals. (Maybe you had to be there.) Sooee generis.

Three hundred earnest kazoos, with full symphony orchestra,
bravely present a high-fidelity, full length recording of Mauric
Ravel's most famous work. No other recording so perfectly
conveys the element of struggle in Ravel's mesmerizing
composition. Struggle, yes-yet eventually, maybe triumph.
Then again, maybe not. In any case, the exhilaration the audience feels when at last the performance ends is surely monumental.